Tonight I got home late from work and didn’t feel like going to the grocery store to pick up fresh vegetables. But I managed to pull together a simple, healthy dinner from ingredients in my fridge and freezer. Although fresh fruit, fish and vegetables are best, frozen and packaged food also count towards your daily vitamins. Think I may have been inspired after reading about wartime nutrition yesterday.

I used some of my favorite rainy day ingredients:

Food is a weapon

Tonight I had a delicious dinner at Angelica Kitchen in the East Village, a place I discovered when I first moved to New York and was living nearby. The restaurant is a vegetarian staple in the city that’s been open since 1976. I tried one of the specials tonight – The Bean-52’s (yes now I have this in my head too): Savory quinoa-vegetable croquettes featuring sautéed butternut squash, carrots, celery, onions & parsley; topped with tarragon tofu cream & served over heirloom ayocote negro bean sauce. Yum. Unfortunately in my excitement I forgot to get a picture but it tasted fantastic and was a perfect dinner for my gluten free week.

But what really inspired me to write a post tonight was the 1943 war poster in the bathroom at Angelica. It made me think about how attitudes to food have changed.

In the war, ensuring people got enough fresh food and vitamins were top priorities for the government. Importing and exporting food wasn’t easy and citizens were encouraged to grow their own food, preserve what they could and minimize food waste. The government took the extra initiative to ensure people were educated about how to can, store, dry, freeze, pickle fruit and vegetables. I love the Vit-A-Min Go game in this article that explains how to eat a Victory diet: Food is a Weapon: Nutrition Programs Fight for Victory. Nutrition played a vital role in improving the population’s health, reducing disease and keeping up morale in a challenging environment.

I spotted a similar poster a while ago in another of my favorite places, DigInn (formerly The Pump). I believe this messaging was originally used in World War I. 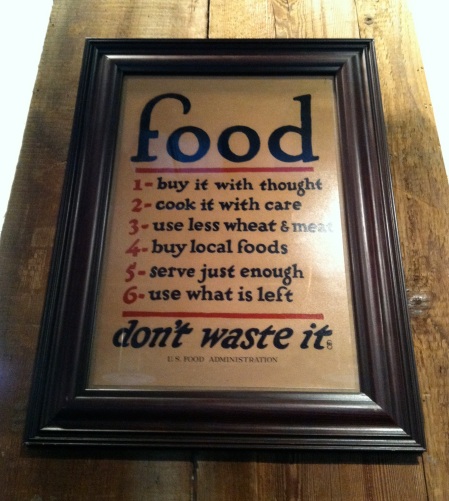 The message in both posters is simple and definitely relevant today. We should all be trying to prevent food going to waste on a daily basis, especially considering the huge food mountains and imbalance in the world. I wish today’s health leaders were as determined to prioritize food education as they were when they had a wartime agenda.

New years resolution number 2: don’t buy this jacket (or dress or coat or cardigan or skirt or anything else) without really thinking about it first.

And of course like most women, I am drawn to the promise of finding a bargain or grabbing something new. But I have resolved to stop purchasing items that I don’t really need or love. That means no sale browsing unless there is something I’m specifically looking for. I want to appreciate every item that I own and invest in quality rather than being driven by special offers. But it’s a challenge because today’s consumer culture is all about fast shopping, with stores doing everything they can to get customers to make a purchase. However, I have noticed a number of recent campaigns that go against the grain and recognize the need for us to become more responsible shoppers.

One of those is the Patagonia Common Threads Initiative. Back in November when the height of sale shopping madness (otherwise known as Black Friday) hit, I came across a thought provoking message on the Patagonia site. It said Don’t Buy This Jacket.

The advert is part of bigger initiative that asks customers to Reduce, Repair, Reuse, Recycle and Reimagine in order to help decrease their environmental footprints. Its aim is to get customers to think about whether they really need something before making a purchase. Of course Patagonia does not want customers to stop doing business with them, but it does understand the need to protect the environment, prevent waste creation, and encourage sustainable living. Patagonia also supports a number of smaller projects, including one that I’m particularly intrigued by: production of ‘Wild Salmon Jerky’ that will help to revolutionize the salmon industry. It’s not just me that believes food and clothing production are related!

I’m hoping 2012 will really become the year of eco-cycology, as predicted by Trendwatching.com, and that more businesses will join Patagonia in developing environmental initiatives.

2012 the year of productivity

I’m still trying to think of some goals for the new year. Of course I want to be better at budgeting, get stronger, run faster, update my blog more frequently, unsubscribe to all the emails that I never read and live a healthy lifestyle, but those things aren’t really new. My main plans for 2012 include turning 30, going on a road trip and running the New York Marathon. But one thing that I do want to change is making better use of my time. I want to do more and I want to do less. By that I mean using the resources I have to become productive. Although productivity (great explanation in this link) is a bit of a vague word that implies creating physical products or content, in my mind, learning and having fun are also important. 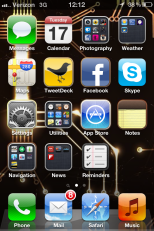 So here’s a few of my favorite apps and productivity tips that I want to incorporate in 2012.

What are your top productivity tips and apps? Please send them my way.

That’s the sound of 2011 whizzing past. I can’t believe it’s gone already. I didn’t manage to stop and say goodbye so I’m doing it now, 1 week late. 2011 was a whirlwind of ups and downs. I had some firsts: I started my blog, broke my first bone, ran my first half marathon, got my first iPhone, went to my first Burning Man, and attempted snowshoeing and snowboarding. My parents sold their house, I moved office and then moved house, got a new work visa and a whole lot more. Here’s my year in pictures:

January began in London and ended in New York with a trip to Half Moon Bay in California in the middle.

February was for snow, skiing, broken bones and surgery. 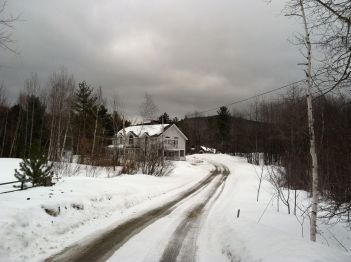 March meant lots of physical therapy, a trip to Vermont, a Connecticut casino and a delicious brunch at Brown Cafe.

April is for Easter, getting back into running and a fantastic surprise visit from a long lost friend from Newcastle.

May I went to Boston and fueled myself on bagels in preparation for the Brooklyn Half Marathon.

June was a quick month that included an office move, going to see the American Ballet, celebrating birthdays and whitewater rafting in Pennsylvania. 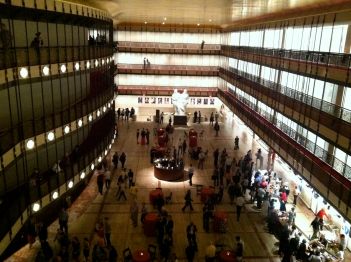 July I swam in an ice cool lake, hiked in the Pyrenees, got a new work visa and visited friends in Newcastle. 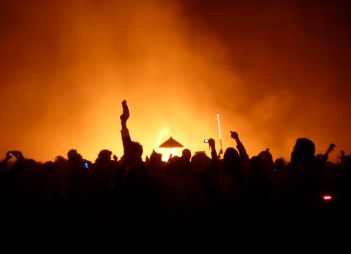 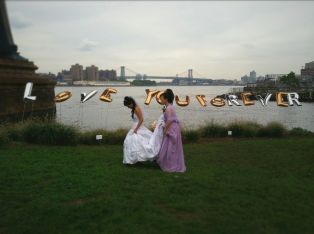 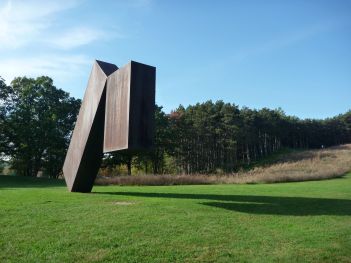 November volunteering at the marathon, one Chicago sunrise, thanksgiving and autumn leaves.

December winter at last, completing my 9+1, ending the year with snowshoeing and cafe gourmands in France.

Around thanksgiving there’s an eerie sense of quiet and calm in New York City, when people leave their city flats to spend the day or weekend with families in New Jersey, Long Island or even further afield. But one place where it’s anything but quiet is at the city’s homeless shelters, where people queue around the block to be served a meal. There are well over 36,000 homeless people in New York, compared to under 10,000 in San Francisco, which is known as the ‘homeless capital’ of the country.

I spent a couple of hours on Thursday at the Bowery Mission in the Lower East Side, an organization which has been helping New York’s homeless since 1879. The Bowery Mission’s kitchen was in overdrive on thanksgiving day; it cooked 500 turkeys and served 5,000 thanksgiving meals around the city. I served drinks and food to a group of around 100 needy New Yorkers in one of the 6 or 7 sittings held at the Lower East Side location. Along with a traditional thanksgiving meal, the organization also provided coats and clothing to those requesting them. It was a very impressive and organized operation especially considering that on an average day, The Mission provides around 900 meals rather than 5,000. In addition to offering food, shelter and clothing to the city’s homeless, the organization has a well established rehabilitation program to help men and women pick up their lives.

Although it didn’t feel like much, volunteering was a humbling experience that made me very grateful to be healthy, employed and have a strong support network of friends and family. As well as the fortune to enjoy a fantastic, slightly overindulgent, thanksgiving meal.

The sky is falling

As Chicken-licken was going one day to the wood, whack! an acorn fell from a tree on to his head. “Gracious goodness me!” said Chicken-licken, “the sky must have fallen; I must go and tell the King.”

It almost feels like the sky is falling today with the persistent rain. But let’s hope no acorn squashes are falling out of the sky. Although it is the shape of an acorn and a lot smaller than some of the other squashes in the NY Magazine guide, I think you might have more than just delusions that the sky was falling down (like Chicken Licken) if one of these landed on your head. 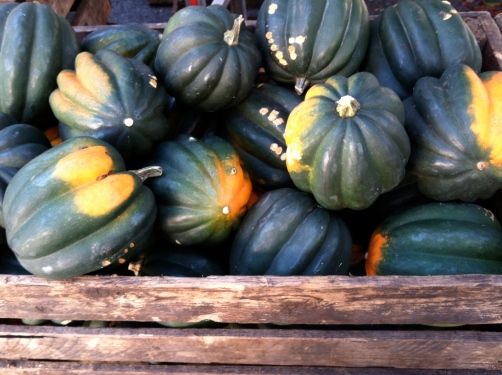 Just like it’s relatives, the acorn squash has bright orange flesh and is pretty tough to chop. I wanted to make something very different to the butternut squash soup I made a couple of weeks ago. The other criteria for my recipe were using ingredients I had already and minimal chopping of the raw squash. A quick search for feta, quinoa and squash delivered this fantastic sounding recipe: Butternut squash with quinoa, feta, basil and mint. Of course it got a little editing, as I like to make things simpler, and I used acorn squash instead of butternut but this recipe is definitely recommended. 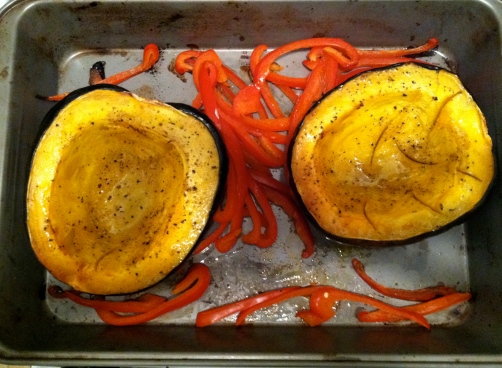 This dish really tasted as good as it looks. I would add some pinenuts too, as suggested in the original recipe. Although it tasted very similar to butternut, I think the acorn squash is actually better for stuffing because of it’s shape. Here’s another recipe using risotto that I hope to test before squash season finishes, coincidentally from a chef in Chicago: Oven-roasted acorn squash stuffed with artichokes, green peas, chile de arbol, mushrooms and saffron rice